The birth: Chai was rescued from a farm in Iowa where she was found in a soy bean bag. She came to me with severe eye infections, major ear mites, worms, and uneven pupils. Although we don’t believe she has any blindness, her left pupil was never fully developed and is always dilated, making her look like a funny anime cartoon character. The vet selected her estimated birth date to be April 16, 2009.

How she got her name: I thought her coloring was really unique. She was a pretty mix of orange, brown, and gray. She reminded me of one of my favorite Autumnal hot drinks, a soy chai tea latte! She was found in a soy bean bag so why not name her Chai!

What she loves best: Chai loves jumping on her human’s backs. She leaps from the floor directly onto your back if you are in one of her favorite areas: the kitchen, the bathroom, or a doorway. She is very athletic but since she has all of her claws it can sometimes be a painful experience. 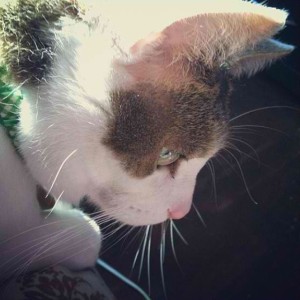 The birth: My first ever kitty baby was born July 2, 2002. His mother, a stray we named Halo, was a tiny little all black cat with a white ring on her forehead, hence her name. He was part of her tiny litter birthed under our family’s basement steps.

Charlie was actually first adopted by a family who named him Dakota, but later had to give him back to us after they realized their son was highly allergic to cats. The best thing that could have happened to me!

How he got his name: I always loved the way Anne-Marie from All Dogs Go to Heaven pronounced the name “Charlie”.

What he loves best: When he was a kitten he would place his “kills” on my pillow as an offering, they included: pennies, hair ties, milk carton rings, jewelry, basically anything tiny and shiny he found on the floor.

He once brought me a dead mouse. The mouse had already died on a sticky pad that my roommate had placed down a few days before in an attempt to control the mouse infestation that had plague the 100 year old house we were living in. He was so proud to show me his “kill” he awkwardly hulled the dead mouse, sticky pad and all, up the flight of stairs to my room.

Currently  his days are spent finding the warmest sunny spot on the floor, watching birds out windows, and fending off/playing with his energetic sister, Chai. Charlie is extremely social, and the definition of handsome.

One thought on “mother of kitties”